Rules neither too much nor too little

The history of arbitration is longer than the formal courts o­ne and dates back to Vth BC. However, dynamic development of this form of alternative dispute resolutions begun in XX th century along with the creation of The International Chamber of Commerce in Paris. This body was to create the ground for swift and inexpensive dispute settlement between merchants. more 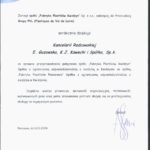